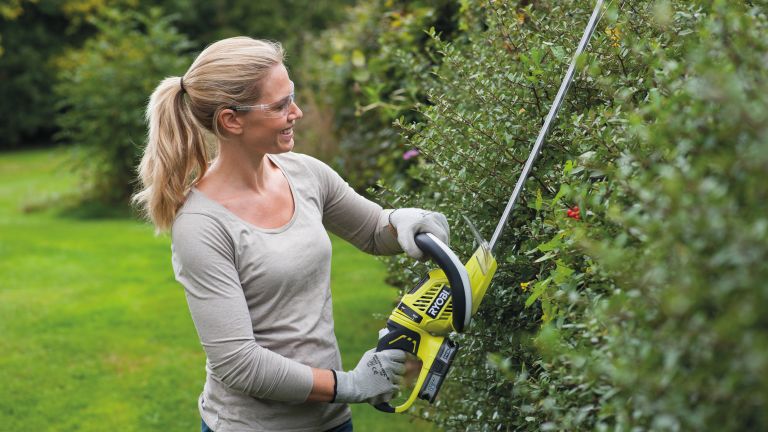 There's no beating about the bush. Learning how to trim a hedge can be tricky when you first get started. You always need to make sure you know which variety of hedge you're dealing with before you even think about picking up the best hedge trimmer to tackle the job. Different varieties are pruned during different seasons and with some it’s as much as three times a year, while with others it can be just once.

It’s also a good idea to have a plan in mind about what you want the end result to be like. If you like a very clipped look it can be a high-maintenance option as it could mean pruning several times a year plus tidy-ups in between. If, however, you like things to look more informal you can ease up with the gardening tools and let nature take its course. Either way, with our top tips, getting to grips with how to trim a hedge will be a breeze.

When should you trim a hedge?

How do you trim an overgrown hedge?

There is a huge range of tools to achieve a professional looking finish. In addition to our pick of the best secateurs for smaller pruning jobs and quick tidy ups for small bushes, there are also garden shears, loppers and electric or petrol hedge trimmers for those bigger hedge trimming tasks. Always use tools that are sharp and rust free that will make a clean cut without leaving ragged ends where blight can take hold. You can also use an anti-bacterial spray to disinfect your shears or secateurs to avoid any diseases spreading. Cut just above a bud, at an angle sloping away from it to let any moisture drain away. If you make a straight cut this can let moisture get in. Choose the right tools and it makes the job go much more smoothly.

Can you trim a hedge too much?

Before you start, decide how much needs cutting and remember to stand back every now and then to take stock of your work and check you are on track. If the hedge looks vibrant and healthy cut only overgrown branches or stems so that the overall shrub isn’t slashed back too hard and it still looks attractive. Start by removing shoots that are growing out of line and keep going until the hedge is the required size.

Does trimming a hedge make it grow thicker?

If your hedge is overgrown or not looking its best think about removing about one-third of the woody stems. This rejuvenation technique will make your hedge look fuller and will lead to fresh green shoots. Removing any damaged or diseased branches helps too as it makes the hedge look bushier. Sometimes you need to go in hard though and cut right back if your hedge is looking past its best. Most hedges recover really quickly afterwards as a good slash back stimulates vibrant new growth.

Can you kill a hedge by trimming it?

Uncontrolled trimming or cutting off more than is necessary can damage a hedge. Cutting off too much green growth can also send it into panic mode. But generally hedges tend to be quite resilient. The ‘right’ time of year to prune varies according to the variety. Doing it at the wrong time probably won’t kill it (unless you do it again and again) but might weaken it. Sometimes it’s unavoidable though. If you see a stem damaged by high winds or being attacked by blight it needs removing immediately. So making a few cuts too many probably won’t hurt, but if in doubt always go easy…