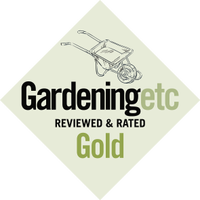 The Ooni Koda 16 gas pizza oven is the Ferrari of pizza ovens – fast, great looking and a bit of an investment. It’s the perfect pizza oven for feeding a family or if you’re entertaining, thanks to its extra-large 16-inch pizza stone. We love how it produces perfectly crispy pizzas in just 60 seconds thanks to the unique L-shaped cooking area. Its modern design will look great in any alfresco kitchen, too.

If there’s one food guaranteed to unite people, it’s pizza. From fussy eaters to those with dietary requirements, there’s a pizza recipe to please. Which is one of the reasons why pizza ovens have soared in popularity over the last few years. So when I was offered the Ooni Koda 16 gas pizza oven to review, I suddenly found myself more popular than ever.

Four months in and the Ooni Koda 16 has been worth its weight in gold, whether we’re entertaining or just need a last-minute family meal, this outdoor pizza oven comes to the rescue. Even though I’ve tested the oven in cold weather, it hasn’t deterred us from using it. In fact, we had pizza four times this week at the request of three sets of visiting friends and our rather persuasive five-year-old.

If you’re searching for the best pizza oven for your alfresco kitchen, then the Ooni Koda 16 definitely deserves your consideration. Read on to find out how I found everything from setting it up to nailing the cooking process.

Laura Crombie is Content Director for Gardeningetc and our sister brands, including Real Homes and Homebuilding & Renovating. She has been testing household appliances and DIY products since starting her career as a journalist 15 years ago.

Laura lives with her husband and two daughters and is currently DIY-renovating a 1960s house – the garden is next on the to-do list. She’s a self-proclaimed pizza connoisseur and tested the Ooni Koda 16 over a four-month period. You can find out how we test products on Gardeningetc for more details.

At 18.2kg, the Ooni Koda 16 arrived in a fairly hefty box that left me worrying there would be 100 pieces inside that needed assembling (I still have nightmares about our last BBQ). Luckily, my fears were unfounded and the pizza oven was in fact ready assembled. All I needed to do was slot in the pizza stone and pop up the three legs, which fold down for easy storage.

Packaging was sleek and minimal, with only one piece of plastic bubble wrap – to protect the fragile pizza stone – that couldn’t go in my kerbside recycling. A handily located QR code prompted me to download the Ooni app, which contains hints for cooking, as well as a host of recipes.

I was impressed by how sleek and modern the Koda is. It would look the part in the most contemporary of outdoor kitchens and got admiring comments from everybody who saw it. My five-year-old daughter thinks it looks like a space ship and she’s not entirely wrong.

An instruction manual explains where you should position the oven and gives some essential safety instructions on how to use a pizza oven too. We’re renovating our house and don’t have an alfresco kitchen yet, so we settled on a sturdy cast-iron table to stand it on. Obviously, plastic or glass surfaces are a no-go because of the temperatures the oven reaches. Ooni recommends choosing a sheltered spot that’s 3ft (1m) away from plants or structures. The manual also advises that it should ideally be placed on stone, marble or stainless-steel surfaces.

A separate leaflet outlines how to attach the hose and regulator that are included with the Ooni Koda 16 to your gas cylinder. This proved much easier than I was expecting – you literally hold down a button and clip the connector to the cylinder. The instructions explain how to use water and dish soap to test the hose and connectors for any gas leaks before firing it up, which you should do every time you use the oven.

Once the Ooni Koda was in position and connected to the gas, it’s simply a matter of pressing in and turning the ignition knob. It’s like a gas hob in a kitchen in that you hear a click as the oven ignites and need to keep the knob compressed for a few seconds while the flame gets established.

I left the oven to heat up for 30 minutes before the first use, which is what Ooni advises. After that, I’d wait 20 minutes each time for it to get up to temperature.

My biggest issue with the Ooni Koda is that you’re meant to allow it to reach the correct pizza oven temperature of 500˚C (950˚F) before cooking, but there’s no built-in temperature gauge. I’ve popped the Ooni infrared thermometer (opens in new tab) on my wishlist but in the meantime I’ve worked out that it takes 20 minutes for flames to start rolling up the roof of the oven, which seems to be peak pizza cooking time.

What's it like to use the Ooni Koda 16 gas pizza oven?

I once ate 17 pizzas in 14 days on a trip to Italy but I’ve never actually made pizza myself – mainly because I never think you can achieve that delicious thin, crispy, slightly charred base at home. Anyway, because I’m a novice pizza chef, I decided to use Ooni’s readymade sourdough pizza balls (opens in new tab), which come chilled and can be frozen, for consistency.

Once the Ooni Koda 16 has been heating up for 20 mins, I flour up the pizza peel to stop the base sticking, and then quickly stretch out the dough by hand. It’s important to do this rather than rolling it as you keep the air in and get those lovely bubbles on the crust.

You need to prepare one pizza at a time in this way to make sure they don’t stick. Then you use a flick of the wrist to launch it into the pizza oven. The L-shaped flame in the Ooni Koda runs along the left-hand side and back of the pizza oven, so the back-left is the hottest part of the pizza stone. I start my pizzas back there, leave for 20 seconds and then use the peel to rotate the pizza 90 degrees to crisp up the other side. After another 20 seconds, I move the pizza around again and drag it to the front-right of the oven, where it’s slightly cooler, to finish cooking through.

It takes a couple of goes to perfect the technique but once you do it becomes second nature. I found that 16-inch pizzas take a little longer than 60 seconds to cook through, but no more than 120, so it’s a balancing act to make sure the crust doesn’t burn.

We’ve cooked everything from vegan pizza to dessert pizza (chocolate spread and bananas – try it!) and I’d say my top tips are to get the base as thin as possible and not overload it with toppings as they can make the base go soggy quickly post-cooking. The oven seems to maintain its temperature pretty well but I’ve found it’s best to wait 3-4 minutes between pizzas to make sure it’s back to full temperature each time.

If you're concerned that cleaning a pizza oven will be a tedious task, fear not. The Ooni Koda 16 gas pizza oven is as easy to keep clean as it is to set up, which is a godsend after hosting a pizza party when you just want to put your feet up. Simply wait for it to cool down, which takes up to three hours as it’s so big, and then use a firm brush to remove any flour or residue from the pizza stone.

The instructions say that the outside can become discolored after repeated use but ours is still looking good after four months. I give it a quick wipe with a damp cloth after each use and then we store it in a brick outbuilding with the gas canister disconnected.

I mentioned that the Ooni Koda 16 is like the Ferrari of pizza ovens… and the list of optional extras is similar to that of a supercar (I imagine!). As well as the aforementioned thermometer, which would be super handy for checking you’ve reached optimum temperature before and between pizzas, there’s everything from wooden serving peels to cast-iron griddle pans.

These would be a great addition if you're keen to explore what else you can cook in a pizza oven, and want to give everything from meat to veg a go. My normal oven pans wouldn’t be able to withstand the temperatures of the Ooni Koda, so I’ve popped one of these on my holiday sales wish list.

As well as accessories for the oven, you can also buy the sourdough pizza balls I mentioned, which are perfect for popping in the freezer and defrosting the night before a party, and boxes of Ooni pizza dough mix to ensure you get the base just right.

How does the Ooni Koda 16 pizza oven rate?

Before testing the Ooni Koda 16 gas pizza oven, I wasn’t convinced we’d get much use out of it. The idea of standing outside cooking pizza in the middle of winter didn’t seem that appealing. But one test drive in and I was hooked. It’s so easy to set up and use that we get it out at any opportunity. It now provides my daughters with their favorite dinner and is more popular among our friends and family than we are. Even our plasterers gave it the thumbs up.

But you don’t need to just take my word for it. There are more than 700 positive reviews for the Ooni Koda 16 on Ooni’s website and they give it an average rating of 4.8 out of 5, which is exactly where I’d put it.

I especially love the Great Pizza Guarantee, which means that if you can’t make tasty pizzas on the Ooni Koda within 60 days of having it, you can return it for a refund. So there’s basically nothing to lose. You also get a three-year manufacturers warranty, for peace of mind.

As one of the larger Ooni models, the Ooni Koda 16 gas oven is at the pricier end of pizza oven models so it’s definitely an investment buy, but one that is well worth it after testing it out. If you are happy to cook 12in pizzas instead, you might want to consider the smaller (and less expensive) Ooni Koda 12 gas pizza oven (opens in new tab) instead. And if you like the idea of a more traditional wood-fired oven, then the Ooni Fyra or the multi-fuel Ooni Karu 12, both of which we've reviewed and rated on Gardeningetc, are certainly worth a look.

There's no doubt, however, that the Ooni Koda 16 is a pizza oven you will turn to at all times of year for family meals and when entertaining. In fact, we love it so much that we’re designing our entire outdoor kitchen around it.

Laura has been writing about homes and gardens for 14 years. She started out as a newspaper reporter, then was editor of a regional magazine, and editorial manager for a travel company. She started at Real Homes magazine in 2015 as Deputy Editor and then become Editor before taking on her current position, which focuses on video and events.