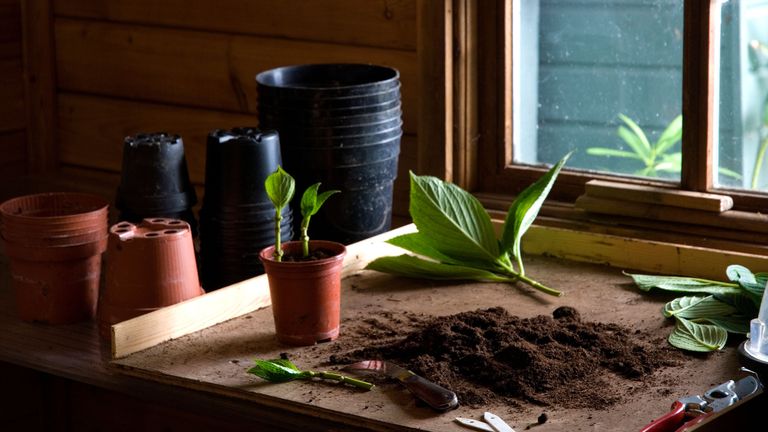 Follow our top tips on how to take cuttings from plants and you'll find you have a really easy way to multiply your favourite plants and, best of all, it’s absolutely free to do. This will potentially save you a fortune on stocking up at a garden centre or nursery each year. By taking cuttings, you can turn almost any plant into three, four or even more new ones and you can do it at any time of year.

As well as increasing your stock of plants, taking cuttings is a good insurance policy in case half-hardy perennials or tender shrubs don’t survive a cold winter. Cuttings taken in late June to early August are known as ‘softwood cuttings’ and these usually have the highest success rate. Later in the summer, though, ‘semi-ripe cuttings’ can be taken, and late autumn and winter is the time for ‘hardwood cuttings’.

Keep reading for our top tips on what to do when to make sure you get the best results. Want to give your cuttings the best chance of growing and make even more savings? Find out how to compost in our guide and you'll be off to a great start.

HOW TO TAKE SOFTWOOD CUTTINGS

These can be used to propagate both hardy and tender perennials as well as deciduous shrubs, climbers and some trees, and are taken in early to mid-summer.

What time of day should you take softwood cuttings?

First thing in the morning is the best time, as the parent plant will still be full of water (turgid), which makes it more likely that rooting will be successful.

How to take the cuttings

Using sharp, clean secateurs (you can find the best secateurs in our guide), snip off the top 5-10 centimetres from the soft new growth on the parent plant, just below a single leaf joint or pair of leaves (this is where there is a concentration of hormones that will stimulate root production). Choose only healthy, pest-free shoots with no flowers or buds. Gently pull off and discard the bottom few leaves. If you’re taking lots of cuttings, put them in a glass of water as you take each one – this will prevent them wilting until you’re ready to pot them all up. It’s a good idea to take several cuttings from each parent plant to increase your chance of success.

Fill small pots with moist but free-draining compost (a mix of 50% cuttings compost and 50% horticultural grit or perlite is ideal) then push several cuttings around the edge of each pot, keeping their remaining leaves clear of the surface. Water well and allow excess water to drain away. You should be able to fit three or four cuttings in a 10cm pot – be sure to position them so that their leaves don’t touch.

Some people swear by first dipping the base of each cutting in hormone rooting powder (which you can buy in little pots from garden centres) to encourage root growth, but for softwood cuttings it’s not absolutely essential.

Cover the pot with a clear plastic bag (a freezer bag works well, or use a sheet of clingfilm) and secure with an elastic band. Put the pot in a warm, light spot (a windowsill is ideal, but not in direct sunlight).

Briefly remove the plastic cover every day to shake out any condensation from it and check for signs of growth. Within a few weeks, roots should have formed – check for them beginning to grow out through the holes in the bottom of the pot, or by very gently pulling on the plants: if they resist, it means roots have started to form. At this point, move the cuttings into individual pots to grow on.

Harden off the cuttings for about two weeks before putting them outside – to do this, stand them outdoors for an ever-increasing amount of time each day. Remove any dead, rotting, dying or diseased material at least weekly.

Deciduous shrubs like buddleja, fuchsia, hydrangea, philadelphus and perovskia, plus hardy and tender perennials such as salvia, osteospermum, penstemon, pelargonium and verbena.

HOW TO TAKE SEMI-RIPE CUTTINGS

September is a good time to take ‘semi-ripe’ cuttings from a wide range of hardy climbers, herbs, ground-cover plants, shrubs and trees – especially evergreens. The shoots you choose at this time of year will be slightly more mature than younger softwood cuttings – the base of the cutting will be hard, while the tip will still soft and pliable. The process of taking and nurturing both kinds of cutting is basically the same, though.

How to take the cuttings

Avoid damaged, unhealthy, or over-vigorous shoots and choose ones with short internodes (gaps between the leaves). Cut just below a leaf node and aim for a cutting around 10-15cm long. Then pull away the lowest leaves and the soft tips so you have about four leaves remaining. Dip the bottom of each cutting in hormone rooting powder, and tap gently to remove the excess. Insert into free-draining compost as for softwood cuttings and, if they’re from large-leaved shrubs, cut the leaves in half to reduce water loss. Cover as before.

Although cuttings taken in summer seldom need extra heat, some of these later cuttings will root more quickly if they’re placed in a special heated propagator. Hardy shrubs, though, can be pushed directly into the soil outdoors (dig in plenty of organic matter first), or in a cold frames or a low tunnel made from polythene sheeting - they may not get a full set of roots until late spring the next year, though.

Passion flower, solanum, trachelospermum and salvia, as well as evergreen shrubs such as camellia, ceanothus and hebe. Also herbs like bay, lavender, sage and thyme. Trees that can be propagated by semi-ripe cuttings include holly, and many evergreen conifers.

TOP TIP You can also take what’s known as semi-ripe ‘heel’ cuttings by pulling a piece of the stem away, leaving a ‘tail’ of bark from the previous season’s growth. Ceanothus, berberis, jasmine, sambucus and cotinus are both best propagated from heel cuttings in this way. Dip the heel in hormone rooting compound before proceeding as above.

HOW TO TAKE HARDWOOD CUTTINGS

Softwood and semi-ripe cuttings need to be taken at a time when there are lots of other garden jobs needing attention so it’s good to know that some can still be taken later in the year, as the garden starts to wind down.

When to take hardwood cuttings

These later ‘hardwood cuttings’ are a good way of propagating deciduous climbers, trees and shrubs, and they can be taken from mid-autumn until late winter. They take longer to develop roots but it’s a very reliable method and you can leave them outdoors and forget about them until the following year – the cut surface will develop a callus over the winter and roots develop from this in the spring.

How to take cuttings

Choose vigorous, healthy shoots that have grown in the current year and remove the soft tip growth from them. Cut the shoots into sections 15-30cm long, above a bud at the top. Use a sloping cut so that rainwater will run off it easily (and to help you remember which end is the top!). Then cut straight across at the base below a bud or pair of buds and dip the bottom cut end into hormone rooting powder.

Fill a large pot with multi-purpose compost mixed with horticultural grit or perlite and water well, allowing excess water to drain away. Push the cuttings into the compost with two-thirds of each one below the surface. Allow 10-15cm (4-6in) between cuttings. Stand in a sheltered spot outside and leave them until the following autumn, making sure the compost doesn’t dry out in dry periods.

Suitable for:
Most deciduous shrubs including deutzia, buddleja, cornus, ribes and roses. Climbers such as vines and honeysuckle. Fruit, including gooseberries, black, red and white currants, and figs. Trees, including salix (willow).

There are a few plants that need slightly different treatment such as asters, chrysanthemums, delphiniums and lupins for example. For these, take ‘basal’ cuttings in spring from clusters of young shoots at their base, selecting sturdy shoots 7-10cm high, with the leaves just starting to unfold. Remove them as close to the base as possible, using a sharp knife and taking some of the woody basal tissue too. Proceed as for softwood cuttings, as detailed above.