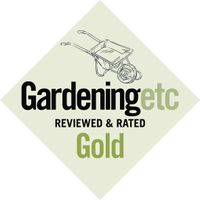 We think that the Cobra is a well made and capable little machine. No, we wouldn’t try it on a 20ft conifer but it is perfect for lighter work and the two speed settings make this hedge trimmer more versatile than many of its competitors. Overall we liked its simplicity, enjoyed the convenience of its battery and think that it will be good choice for any gardener who wants a solid little trimmer that makes a tidy job of light to medium hedge maintenance. It’s also bright red and has a ‘turbo’ button, which is always fun!

Cobra, which has been around since 2013, offers over 130 different gardening tools. Unlike some of their competitors, they work across the different power sources offering petrol, mains electric and cordless tools. The Cobra H5024V Li-Ion cordless hedge trimmer is one of two hedge trimmers Cobra offer, running on the 24V battery system. They also offer 40V battery, petrol and mains powered models.

I tested the Cobra H5024V Li-Ion cordless hedge trimmer on a variety of different hedges over the course of a few weeks to see how it performed in a real world test. In general I was pleased with the results and thought that it made a very good job trimming and tidying our hedges, making it a contender for our list of the best hedge trimmers for your garden.

Steve has a vast knowledge of gardening and has written a huge number of practical gardening books. When he's not writing or answering listeners’ questions during the live gardening phone-in show and he regularly guests on BBC local radio, he can be found testing a wide range of gardening tools in his own garden and that of his neighbor.
Whether it's putting the latest lawn mower through its paces or cutting a hedge down to size with a cordless trimmer, he knows what makes a standout buy that will last for many years to come.
Steve tested the Cobra H5024V Li-Ion cordless hedge trimmer over the course of several weeks, using it on a wide range of hedges to see how it coped with the different thickness of branches on each one.
Find out how we test products at Gardeningetc if you want to learn more about the review process.

The Cobra H5024V Li-Ion cordless hedge trimmer was delivered in a smart box with a picture of the product on the outside and a lot of Cobra branding. I like Cobra’s graphic design on its packaging; the grass trimmer has grass on it, the hedge trimmer has leaves on it, and so on. It’s a nice touch and gives a ‘does what it says on the box’ feeling. It also ties the range together well.

When you open the box up, you are greeted with the hedge trimmer, a battery, a charger and the instruction manual. I was pleased to see that a lot of the packaging was cardboard, rather than plastic, so it can be recycled.

The unit itself feels very solid and well finished and at 2.6kg, it feels sturdy without being too heavy. One thing that I did notice was the shiny plastic used on the handle. While there is nothing wrong with the design (and in fact I actually quite like the red) I do think it’s likely to scratch up very easily. I always prefer to see hard-wearing matt plastic simply because, if a tool is getting used, it's going to be subjected to wear and tear.

There was a clear plastic protective sleeve over the cutting bar. While this was adequate, it was a bit flimsy and I do wonder how long before it starts to go brittle.

The great thing about this Cobra hedge trimmer is that it requires no set up. The unit is complete and ready to go as soon as you take it out of the box. The accompanying A5 instruction manual gives details of operation and the usual safety dos and and don’ts. It was all easy to follow, but I thought that the images could have been better. They are photographs, rather than diagrams, and they came out a bit dark in our copy, so they weren’t as clear as they could have been.

Interestingly, the manual also recommends giving the battery a full five-hour charge before you use it. I'm pretty sure virtually nobody is going to this because, let’s be honest, who reads the instructions on a product that arrives complete until something goes wrong? There probably should be a sticker actually on the battery if it's that important.

When it comes to charging, again it's all pretty straightforward. Cobra's charger is basically a plate that slots over the battery rather than a cradle for it to sit in. So you slot it on, turn on the juice and wait. When it’s full, the green LEDs on the battery let you know and you are ready to go.

I tried out this cordless hedge trimmer on several different hedges with good results. I was pleased with how it handled and the result it gave. It made a much nicer job of our beech hedge than the equivalent Greenworks G24HT56 model. I thought the Cobra gave a nice clean cut and it felt powerful enough to do what we asked of it.

I like the two stage process to turn on this hedge trimmer because it means that it cannot be turned on by mistake or by young children. I tested a similar sized Ryobi hedge trimmer that could be turned on just by picking it up and I thought it was potentially very dangerous.

Unlike most other trimmers, there are two speed settings on the Cobra H5024V Li-Ion cordless hedge trimmer, similar to other Cobra products. Two buttons on the top of the machine allow you to switch between ‘eco’ mode for light work and ‘turbo’ mode for more demanding tasks. Although there is a trade-off in that ‘turbo’ is more powerful and will use the battery more quickly, I like the flexibility this gives.

I found ‘eco’ was ideal for taking off a few leaves and thin stems and ‘turbo’ was better for more dense material, such as conifer.  I also think any product with a ‘turbo’ button is immediately much more fun to use than one without!

Compared to its competitors, the teeth on the cutting bar are quite close together. This is a bit of a trade-off. Closer teeth give a neater finish, but limit how much material the trimmer can cut. Wider teeth, as you’d expect, let you cut wider material but they leave a rougher finish. Which you go for really depends on what you want to cut.

One thing I did feel the trimmer missed was a guard to clear the the trimmings as you work. Models, such as the Ryobi 18V ONE+ cordless 50cm hedge trimmer, offer a plastic guard mounted along the cutting bar which you can use to sweep as you work. It would have been a nice touch to have that option here.

I thought the machine was quite light to use. Not so light that it felt flimsy, but it certainly shouldn’t make your shoulders ache too much. I did think that it was a bit rear-heavy due to the placement of the battery, but not enough to be considered a problem. This is very similar to models such as the Greenworks G24HT56 but not as bad as the Ryobi model, which has its battery at the far end of a long handle.

If you're not up to speed with how to use a hedge trimmer that won't be a problem with this design, as I was pleased to find that the Cobra H5024V Li-Ion cordless hedge trimmer is a very easy machine to use. Just as with the Cobra LRH5024V 24v cordless longreach hedge trimmer, the biggest single benefit is the battery, as it removes the risks associated with a mains cable and anything with sharp teeth, and is a lot cleaner and more pleasant to use than anything powered by petrol.

There is a trade-off in terms of power, especially compared to a petrol model. However, I think for people who are looking for a trimmer to just give their hedging plants a regular ‘tidy up’, this probably won’t be too much of a problem.

The two handles are comfortable to use, the buttons are self-explanatory and there is no aspect of the machine that could be described as complicated. Unlike most other hedge trimmers, it offers a battery readout on the handle, rather than just on the battery. I found this very useful, because it makes keeping track of how much charge you have left much more convenient.

There is no handle adjustment for working at 90 degrees, unlike the Greenworks G24HT56 hedge trimmer. However, while it can be a useful feature, we are not sure if we particularly missed it.

In terms of design, I liked the smooth cutting bar with its brushed steel finish. It shed debris while being used and was easy to clean afterwards. Other models, such as the Greenworks G24HT56, have a series of bolts along the cutting bar which collected a lot of debris while in use and had to be cleaned off afterwards.

The hedge trimmer itself doesn’t require any accessories. However, it might be worth investing in another battery as it is always easier to have a spare battery on charge ready for when you need it. Aside from that, since you are using a potentially dangerous machine, we would always recommend a good pair of safety specs and some well-made gardening gloves.

How does the Cobra H5024V Li-Ion cordless hedge trimmer rate?

Our research into the customer feedback for the Cobra H5024V Li-Ion cordless hedge trimmer showed that it has a 4.6 out of 5